A Simple Race Can Show So Much!

The above picture of the Great Jesse Owens is an inspirational example of Explosion, Skill, Focus, Power and Technique for Linear Speed—This great athlete had it ALL—–having some of these qualities is very important for an athlete —Working on ALL of these qualities on a consistent base is a must. Many athletes and coaches lack the understanding of the need to make time to include Speed Training in their practice plan— everyday! Speed must be consistently worked on—It does not have to be a large amount of time–as little as fifteen minutes of Speed Training can be the difference in a winning or losing performance for an athlete and his/her team.

The picture of the St Louis Cardinal Daniel Descalso is an example of how a player can use the same skills & techniques to make a hit into a double or triple—imagine the importance of increased bases and more runs scored because you had fifteen minutes of Speed Training in your daily practice plan—in both of these photos you can see the Skill and feel the Power that makes both of these athletes successful in their sport.

Speed training is all about teaching skills–Specific Skills that Generate Force Production into the Ground. I always get a kick about asking coaches about who is the fastest player on their teams–and most of the time I’ll get a response that is a specific time for a specific player in 40 or 60 yards—my next question “Is that player faster in the first ten or last ten?” which produces a confused and strange look from the coach. My point is no matter what sport you play–the FIRST TEN yards is the most important in GAME SPEED–In football ( see above photo) your running back had better be able to get to the hole very quickly or the defensive lineman that’s quicker in his first step will fill the hole and the linebacker that has been training on his first 10 yard explosive starts will put your so called fast 60 yard running back on his gluteus maximus. In baseball, middle infielders must have have an extremely quick first step to the ball or the opposition is going to get a great deal of linear speed training— scoring runs—it’s 10 yards, 10 inches—-FIRST STEP—WORK ON IT!!!

1. Aggressive Arm Action Back
2. Strong Knee Drive
3. Positive Forward Lean from Ankles thought Head–Sprinters Form–Power Angle!
4. Drive Leg Back —like a Piston–Not UP but Back!!!
5. Arms not crossing the Mid-LIne of the Body
6. Driving through the balls of the feet not the heels
7. Ankles staying Dorsiflexed on ground contact (Toe to Knee/Heel to Butt)

1. Opposite Knee/Opposite Elbow
2. Arm Drives w/Knee Punch – “Hammer High/Low”
3. Knee Marches – Over One Side of small Hurdle
4. Sitting on Floor and Moving Arms – Quickly!
5. Wall Drills -“Punch Knee High- Toe to Knee/Heel to Butt”
6. Front Side Mechanics (Skipping – Sprinter’s Skipping)
– March with 4 steps or 5 steps –then skip hard into ground-
7. Back Side Mechanics (Butt Kicks)
-Toe to Shin/Heel to Butt-
8. Cycle Mechanics (Slide Kicks)
-Slide Kicks/Cycle Kicks-
9.Lean with Front Resistance and Go (Partner Up)
-March with Resistance –
-March – Run with Resistance
10. Lean and Go!!!!
-Vertical Lean and go
-Stomach on Floor and Go! (Front, Side and Back)

  1. Athletic Stance Acceleration on the Signal- The athlete will be asked to stand in a basic parallel stance and prepare to run only on the signal. Once the signal is heard the athlete will race for 10 yards.
2. Athletic Stance Partner Chase- The first partner lies on the ground, roughly 5-8 feet in front depending on speed. When the signal is given the partner in back must come out of his athletic stance and catch the partner getting up before 10 yards.
3. Ball Drop- Two athletes line up side by side facing the coach or third partner who is holding 2 tennis balls (one on each side) at shoulder height. When the coach drops the balls the athletes will come out of the athletic stance and catch the ball before it bounces twice.
4. “Go”- Two athletes will stand side by side in an esthetic stance. One is the leader and one is the follower. When the leader decides to take off– HE yells Go! and takes off–the partner must react and stay with or beat him to the 10 yard mark.
5. One Foot Balance Starts- This forces the athlete to orient to a greater push off position immediately upon the signal. Each athlete must stand on one foot holding the opposite foot 6 inches or more off the ground.
6. Shuffle and “Go”- Each partner will shuffle away from each other on a straight line. When the leader says go they must both accelerate straight ahead for 10 yards.
7. Jumping Jacks and “Go” – This can be done with any kind of jumping. One athlete will say go and they must race for 10 yards.
8. First to The Line – 10 & 20 yard sprint races–“losers do 10 pushups – Winners do 5 !”
9. Time – Time athletes in 10 yards and 20 yards sprints—keep record of time for evaluation of later runs. 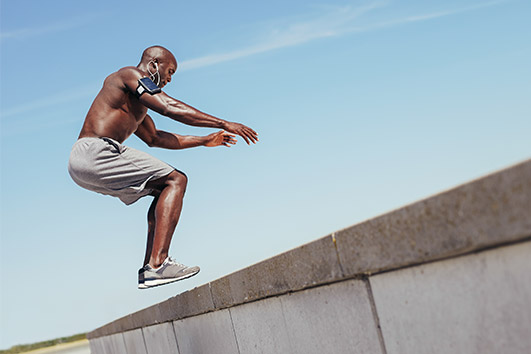 Exercise Technique for the Vertical Jump

Most land-based athletic events require athletes to jump or leap in one way or another. Therefore, the ability to jump without losing balance is thought to be desirable by many coaches and athletes. Furthermore, the ability to jump higher or farther than an opponent generally increases the odds of a successful performance outcome. So, how do you increase the vertical jump performance of your athletes? The first step is to dismiss the various myths about jumping and then develop a progression that sets your athlete up for success.

Many athletes are naturally gifted and one of the most common myths is that 100% of an athlete’s jumping abilities are genetic. Genetic gifts may indeed be a factor, but that doesn’t mean your athlete has already reached their full potential, nor does it mean that they can become a better jumper.

Lifting Will “Bulk” Your Athletes:

Another myth is that lifting weights will bulk up your athlete and negatively impact vertical jump performance. Exactly the opposite is true. Resistance training combined with plyometrics training assists in the development of athletic potential, increasing the power output thereby increasing vertical jump performance. In short, the more force your athlete can produce into the ground, the higher their jump potential becomes.

Proper mechanics is among the most important fundamental skills an athlete must learn. Most athletes are able to jump noticeably higher after learning proper mechanics and jumping technique. There are two primary jumps to consider when teaching jumping mechanics: the countermovement jump and the squat jump.

WHAT IT SHOULD LOOK LIKE– The knees over the feet – the knee caps are in-line with the first or second toes. Do Not want the Knees pushed to the outside because it unloads the natural mechanics of the feet and hips.

I love taking my video camera to sporting events to film my athletes. I am not looking at the same thing that the fans are looking at and cheering for —I am looking at Athletic Movement. Not just linear but in All directions–One of the most lacking speed movements that I witness in games is Lateral Movement–Shuffling, Crossovers and the understanding of Deceleration. What I witness is a lot of leaning –lack of foot movement–which causes the defensive basketball player to watch as he is scored on or the infielder baseball player watches as the baseball goes whizzing by–tell me how many times have you watched a defensive corner back in football get beat due to the lack of a good Crossover Move–Straight ahead speed is usually not the limiting factor in most athletes’s athletic ability. It is the change of direction and acceleration ability moving in all directions. Learning to apply force to the ground is the key–and teaching the Form. Remember “It’s the Skill not the Drill”.

Here are the techniques that must be performed to accelerate in different patterns laterally and angularly:

Shuffle- This is when the athlete pushes off laterally and completely stays sideways with the body. The knees must be bent and the feet do not cross.

Crossover- This is when the athlete moves laterally or angular but is much more aggressive and speed is higher. The athlete does not turn and run completely. The lower body crosses over while the shoulders stay oriented to the opponent or ball. Athletes that posses the ability to Decelerate and Reaccelerate quickly are usually the fastest in multi-directional speed. It is great to have linear speed, but if it can‟t be controlled it is not as effective. Many ACL, ankle, and other injuries occur during the deceleration from running, change of directions of lateral or angular movements as well as landing from jumping. Being able to properly position the feet, legs and upper body to dissipate forces from the joints is crucial. Teaching a progression of Shuffling , Crossover, Back Peddling, Cutting, Deceleration and Re-accelertion helps the athlete to understand how important it is to have the abilities of Multi-Directional Speed.